In the summer of 2013,  five years ago today, Mom undertook a journey with my sister Jacquie and my then two-year old niece Penelope that would take her from Jacquie's home in Mississauga, Ontario to Quebec and on to New Brunswick, in search of Pitre and Fagnan family history. Following her return home to Edmonton, I could not believe how much Mom glowed when she talked of her adventures and the people she met, including cousin Gabriel Tessier from Quebec and Lee Roy Pitre from Louisiana. I could not believe it when Jacquie told me that Mom had kept these notes. So join us today and for the next several days as we retrace Mom's journey to the Maritimes in search of her (and our) family history. There will be an entry for every day of the trip. Mom, the floor is now yours. This is for you Annie. We love you!

A Most Memorable Trip
Thursday, July 18th began a most incredible adventure into my family's genealogical past. Over a span of two and a half weeks, from Thursday, July 18th to Monday, July 29th I was to delve into my father's French Canadian ancestral history in Quebec, as well as my mother's and my children's Acadian ancestral history in the Maritimes. To top it off I was to spend the entire time with my daughter and granddaughter, whom I was to meet up with in Mississauga.
All this began with an exciting email from Lee Roy from Louisiana, whom I had been corresponding with, stating that he planned to come to Annapolis Royal (Port Royal), Nova Scotia in the latter part of July to do research on his upcoming book regarding the Pitre name, which was also my mother's maiden name. I owe a huge thank you to Lee Roy for asking me how far I lived from Nova Scotia in the event that we could meet. Edmonton, Alberta not being anywhere near the Maritimes, I first considered it a longshot until I phoned my daughter, Jacquie, in Mississauga, Ontario. She reminded me that I was supposed to go see them this summer during her vacation time and that maybe if I took a plane to Mississauga, we could all drive to Nova Scotia to meet up with him. After I agreed to this, she proceeded to book a rental vacation home on the Bay of Fundy, on Parker's Cove, near Annapolis Royal for an entire week. I owe a great deal of gratitude to my wonderful daughter for volunteering to do such an amazing amount of driving to make this incredible journey possible.
I first contacted a Quebec cousin on my father's side, Gabriel, who lives in Quebec. I also contacted Marcel, my mother's cousin from Manitoba, as he had been to the Maritimes, including the Annapolis Royal area in Nova Scotia, on several occasions. He informed me that he had several contacts that we could benefit from in our quest to explore the area where our ancestors had lived and worked and graciously offered to get in touch with them and set things in motion. Marcel soon arranged for us to take in several historical tours and attend a special dinner hosted by a distant cousin, Fern, who would also arrange for us to visit the original Pitre homestead, the fact of which was recorded in a 1707 survey.
Beginning on July 18th, after an approximately 7-hour drive, we spent two nights with Gabriel in Quebec on our way to Fredericton, NB. The first evening, Gabriel showed us several slides of Fagnan ancestors and relatives. 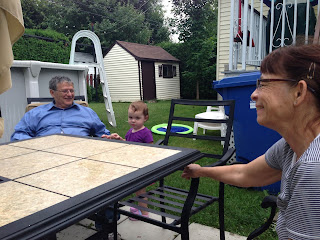