This one makes me hungry. Take it away Mom:


The main point of our trip was to meet up with Lee Roy from Louisiana who was arriving in Halifax around midnight and who would make his way to Annapolis Royal in the wee hours, then to Parker's Cove to meet up with us. He arrived at our cottage early the next morning, Monday the 22nd. We took this time to acquaint ourselves with him and informed him of any new developments that we were aware of. After getting in touch with Fern, our main contact who lived in the area, that we had arrived, we agreed to meet him at our cottage at 4 o'clock so we could all follow him to his own cottage for a special dinner, where a local historian would be in attendance. We decided that this would give us some time to do some grocery shopping in Annapolis Royal and for Lee Roy to check into his Bed & Breakfast place before Fern's arrival.
Returning to our Parker's Cove cottage, we soon met up with Fern whom we followed to Clementsport. A succulent, fresh lobster dinner awaited us, as did a most amazing evening. We were greeted by Fern and Mary, the hosts; the historian, Wayne Melanson and his artistic wife, Marilyn; Wayne and Lorna, visiting us from Prince Edward Island and Fern and Mary's friends, Sid and Nancy. We were seated outside on their gorgeous patio admiring yet another oceanic view. Inside, a most delicious lobster dinner awaited us, the lobsters being freshly caught and huge. Before and after dinner we had the historian at our disposal and Lee Roy and ourselves took full advantage of it. When dinner drew to a close, Wayne, the historian, stood up and explained a custom that Samuel de Champlain had begun at Port Royal, called the Order of Good Cheer, whereby the gentlemen of the colony would each take turns to organize and cook a dinner plus arrange for entertainment to pass their long winter nights away. Then Wayne proceeded to hand the three of us a certificate on which was stated that we were members of the Order of Good Cheer. We were quite touched by this gesture! The certificate had been beautifully done by his wife, Marilyn. Before this wonderful evening ended, we all gathered to take group photos..

That was certainly our mother...the Ambassador of Good Cheer! We love you so much! 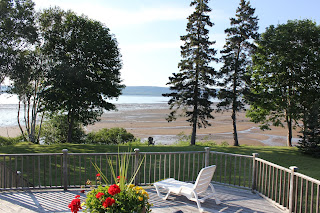 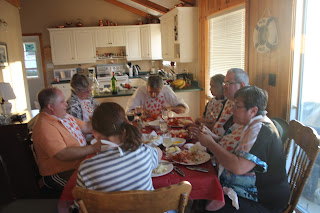 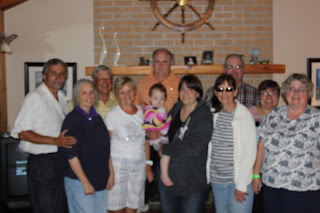 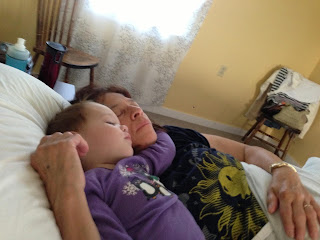